How A Focus On Growth Mindset Will Develop Todays Leader

It’s likely over the last two years you’ll have heard references to ‘having a growth mindset.’

Perhaps you have listened to your senior management team talking about developing a growth mindset culture in your organisation?

While some of you may have read an article or book on this topic, others may be wondering what I’m talking about.

When I was first introduced to the idea of growth vs fixed mindset a few years ago, I was curious and wanted to learn more. Since then I have overheard and listened to many conversations where the term ‘growth’ mindset is used, and not always in the context of what I understand was originally intended.

In this post, which is the first in a two-part series, I want to talk about growth vs fixed mindset; what it means and how it relates to leaders and their team. Then in part 2 I’ll start to share some ideas on how to develop your own growth mindset.

Where Did The Concept Of Growth vs Fixed Mindset Originate? 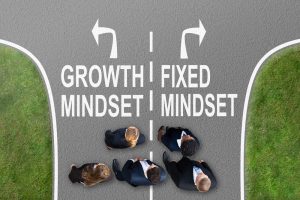 Professor Carol Dweck of Stanford University and her colleagues have been studying students attitudes to failure for many years. They noticed that while many students were able to bounce back after failures, others seemed devastated by even the smallest setbacks.

Having studied thousands of student’s behaviours, Carol Dweck coined the terms fixed mindset and growth mindset. The words describe the kinds of beliefs people have about learning and intelligence.

I guess the obvious question is – what is the difference?

Growth vs Fixed Mindset: What Is The Difference?

Let’s take a real-life situation with two individuals who are doing the same role and have a performance review. Both are ambitious and keen to develop their career.

Person A: Receives an “Under Achieved” grading. Their reaction is; “I’ve failed”, “I am a loser”, “I am an idiot”. “I might as well give up now”, “I’ll never get my over achieved grading at the end of the year now.”

They might also use phrases such as, “It’s not fair”, “Life sucks”

Their response to the review could be that they go out with friends and have a few too many drinks to drown their sorrows, or pick an argument with the first colleague who asks how their review went!

It’s not that these people have low self-esteem, they feel as worthy and optimistic as others do, when they are not dealing with failure. In contrast,

Person B: Receives an “Under Achieved” grading. Their reaction is; 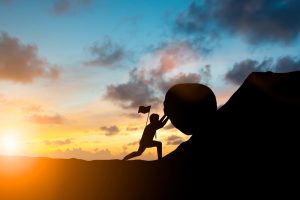 “What do I need to do to  get back to achieved then to overachieved?”, “I need to focus and work smarter”, “I need to stop allowing myself to get distracted”, “I need to finish projects, before taking on new ones.”

Person B then responds by;

Because person B responded differently, this doesn’t mean that they were not upset and disappointed. Their choice of response was different.

What Does This Actually Mean?

Carol Dweck’s theory suggests that Person A believes that their basic abilities, intelligence, and talents are fixed traits. They have a certain amount, and that is that. Their goal then becomes more about looking smart all the time. This is what she calls a fixed mindset.

Person B however believes and understands that their talents and abilities can be developed; if they invest the time, effort and are prepared to persist even when they have setbacks.

As Dweck says “They don’t necessarily think everyone is the same or anyone can be Einstein, but they believe everyone can get smarter if he or she works at it.”

What this highlights is the importance of what we believe about ourselves as a leader, team member, friend, parent or any role we have in life.

If you hold beliefs such as; 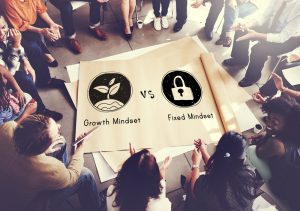 Then these examples of a fixed mindset will probably mean that you will avoid putting yourself in situations where you could fail or feel that you are a failure. Also, you won’t invest time in learning so improving gets harder.

As a leader, it’s helpful to be aware of which beliefs you are demonstrating a fixed mindset so that you know where you are limiting yourself and consequently your team. When you recognise these beliefs, you can start to make changes.

Similarly, you can spot team members who have a fixed mindset and support them to become aware of this so that they can start developing a “growth mindset.”

In part two of this post, I will be sharing ideas on how to develop a growth mindset.

Excel Communications has a 30+year history as a global leadership and communication skills organisation dedicated to exceeding the expectations of clients through the training and development of their business and people.