Does Your Organisation Get Objective Setting Right? 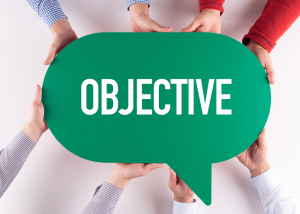 All major corporate organisations across the planet, at least the successful ones, have objectives as a core element of their performance management system and process.

Though objective setting isn’t always the most exciting area of a company’s performance management process, it is the foundation because it’s from this starting point that employees’ success or failure happens.

For objectives to have the desired effect at all levels of an organisation, they need to be compelling. When this is implemented well you can be confident that everyone within your organisation will be bought into the company’s goals and moving in the right direction.

All organisations renowned for growth have mastered communication. Exceptional companies ensure that the ‘big vision’ is cascaded throughout the entire organisation from the higher to lower grades.

This is sometimes referred to as the golden cascade. Here every employee’s objectives are linked to the company vision and realised through specific tasks. For this to work every individual needs to have a handle on how their activities will personally contribute to the wider goals of the organisation.

There is a famous JFK anecdote that demonstrates this well.  During a visit to NASA he was chatting with a janitor who he asked about his take on the NASA vision.  The janitor was very clear that ‘he helped to put people into space and bring them back safely’.  His task of keeping everything clean and bug free hadn’t escaped his understanding of how important his specific tasks were to NASA and the health of all their staff; including the Astronauts.

Top down or bottom up?

Various business sectors will often communicate objectives in a number of different ways depending on the culture of the organisation.

The top down approach involves the manager presenting to the team what their objectives are for their division or department depending on the number of employees involved.

It generally results in a faster communication process with tasks and goals shared equally, or at least in an agreed format.

The alternative is bottom up which involves the manager skilfully, or not, facilitating goal setting by the team. The bottom up way can and does work when it’s implemented and facilitated well by the manager. The spin off benefits include buy in, motivation and a built in level of accountability. 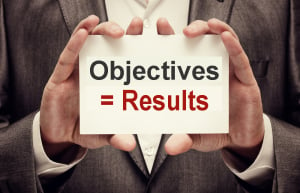 A common mistake that many employees make is to confuse their achievement of objectives with their delivery of tasks that lead to the objective being achieved.  Let me clarify, in other words inputs that then lead to outputs.

For instance developing customer relationships with key clients is an input. The ongoing relationship then  leads to more sales or increased revenue which is the output.

This is why it is important that objectives describe the results that an organisation wants to achieve and not just a string of tasks that will hopefully realise the delivery of the ‘said’ objective.

The S.M.A.R.T. + way of setting objectives

Setting SMART objectives in theory should be common sense you would think; wouldn’t you? Unfortunately that isn’t always the case. SMART objective setting methodology has been used in some form as far back as the late 19th century.

The American philanthropist Elbert Hubbard realised that many people failed in their endeavours. They failed not because they lacked intelligence or courage, but because they did not organise their energies around a goal.

What they needed was a way to organise their efforts to improve their chances of success. It wasn’t until the late 20th century that help arrived in the form of S.M.A.R.T. goals.

It is generally accepted that the S.M.A.R.T. acronym was first introduced in November 1981 by George T. Doran, a consultant and former Director of Corporate Planning for Washington Water Power Company. He published a paper titled “There’s a S.M.A.R.T. Way to Write Management’s Goals and Objectives” as they say the rest is history; though not quite. 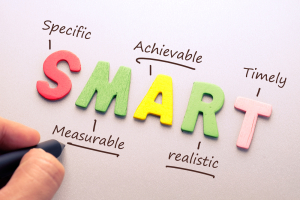 In a number of organisations where Excel Communications deliver their leadership and management programmes, there is an additional part of the formula hence the
S.M.A.R.T. +.

The plus refers to the ecological aspect of goal and objective setting that George Doran didn’t include. With today’s workforce changing to worldwide domination by the Gen Y generation of employees, S.M.A.R.T. goal setting needs an update that includes the ecological aspect of fitting with an individual’s values and personal ambition, while concurrently not getting in the way of others.

Reviewing the different aspect of S.M.A.R.T + below you can see how the addition of ecology makes S.M.A.R.T. fit for purpose in today’s business world.

Ready to take action? We hope so.

At Excel Communications we have delivered Leadership and Management training over 30 years on most continents in multiple languages. You can view the results we get for clients here. Alternatively call us on +44 (0) 1628 488 854