One of the key roles of today’s manager is to develop and retain the talent within their team with the goal of ensuring that the organisation meets its growth objectives.

Not the easiest of tasks when you consider the habits of the millennial workforce and a global skills shortage that McKinsey reported on in 2012 that’s still raging across the globe. 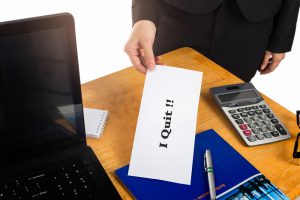 Why do people leave organisations?

The unanimous evidence reveals that the main reasons why employees leave organisations fall into a small group of categories, all of which, any company has the power to change.

Let’s start with the most common reasons people pack up and go.

Fact: Employees leave their roles because of their managers, more than any other reason.

At the end of last year Approved Index, the UK business purchasing conglomerate, ran a B2B survey that confirmed yet again that people tend to leave managers rather than organisations.

In its survey of 1374 employees, the results revealed that 42% of people had left a job because of a bad manager and a further 30% said their line manager lacked skills. Similar figures are also prevalent in North America where a Florida State University Study by Professor Wayne Hochwarter revealed almost identical numbers

Why is this so common?

No matter what size organisations are, many managers are promoted into post without the necessary training, development and support.

Even when new managers are enthusiastic and proactive about their own development and are reading voraciously around the subject, problems will still arise. Why? The facts are that they have yet to understand practically, how to ‘manage’ people and teams in the real world.

The first real management challenge often sees them either crumble or revert to a ‘my way or the highway ‘approach, neither of which is ideal!

The good news is that it doesn’t have to be this way. Many organisations who are focused on growth have recognised this and a key strategy they instigate is to focus on management development as a driver to improve their profits and share price. Here is a case study with one organisation that illustrates what is possible when managers are consistently given support and training. 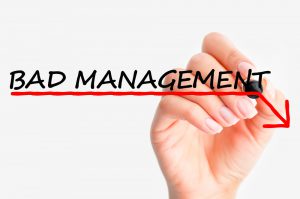 Hard on the heels of being a ‘bad manager’ is the lack of empowerment employees perceive they have.

Maxwell Maltz the famous author of the ground breaking work on self-image, uncovered through his research that an innate drive of human beings is to be successful.

You can read more about this in a recent article on delegation here. You’ll be surprised how much more efficient and effective your team can be without having to funnel everything through you.

Yes, you can start small and give people more authority as they demonstrate their skills and ability and earn your trust. Your goal should be to have your people moving forward on their own, with minimal intervention from you.

“Well done Amanda/John/Imran!” appears to be a phrase missing in many organisations, according to the data we have reviewed.

Recognition is important for all employees with many using it as a reference point to either evaluate their own skill level or their position in an organisation.

Internally referenced people have an on-board sense of good and bad, right and wrong. They don’t really need others to tell them. Their need for recognition is less and may forget to give it to others too!

But externally referenced people really care what their manager or team members think. That’s their bench mark of good performance and they need recognition.

You will have members of your organisation that fall into both these camps. The question is, do you have the skills to deal with it?

Lack of recognition plays a huge part in why people finally decide to leave. In some organisational cultures performance is rewarded financially which is all well and good, though often it’s the lack of the simple “thank you” that causes employees to feel undervalued and then to finally leave.

Interestingly the above “three reasons why people leave” are all preventable when managers are trained in the key management essentials and then given ongoing support.

Do you develop and support your managers in a consistent way? If not employees might be leaving your organisation for these very reasons.

At Excel Communications we have delivered management skills training over 30 years on 4 continents and in 30 languages. You can view the results we get for clients here. Alternatively call us on +44 (0) 1628 488 854